Showing posts from March, 2020
Show All

- March 09, 2020
Posting this a little late as there's been quite a lot going on throughout my enhancement week (a week in which we're technically meant to take a break from work :D). I went to Vertex 2020 and got to hang out with my friends in London and see the amazing Karla Ortiz, Loish and Even Amundsen talks & demos. I'm planning to make a post about the talks because I noted some amazing advice that I'd definitely like to remember and revisit in the future. I did take a 'proper' break as well, managing to re-watch three seasons of Parks&Rec (speeding up videos to x1.5 is probably the best and worst habit I developed in my twenties so far, lol) and going through my long-abandoned anime to-watch list (currently in the middle of FMA Brotherhood!).

I worked on my projects here and then, mainly polishing up Kled and designing his pedestal (coming soon-ish), but I only fully returned to my Ashe a few days back. This is where she's at now: 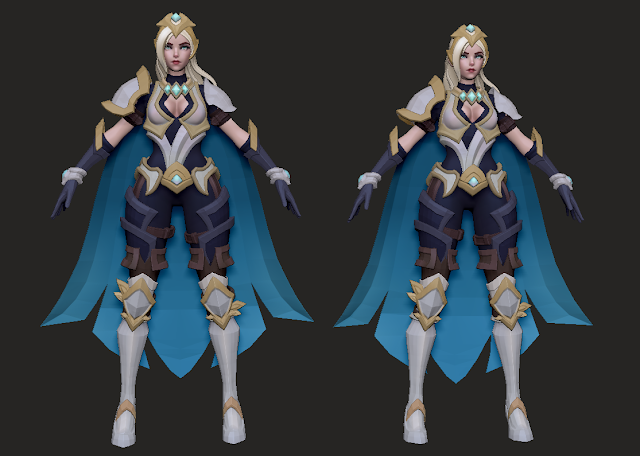 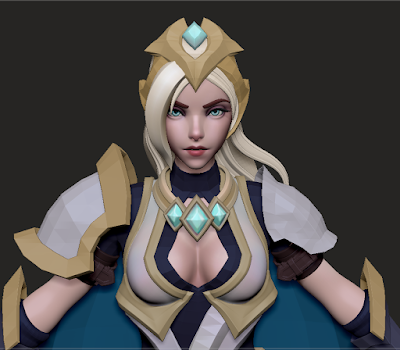 The sculpt is still in WIP but a bit more refined than before. Among the things to still address is:
- On assets like shoes and shoulder guard, go over the topology to allow clean finish when subdivided
- Add armor to waist
- Get more feedback on proportions
- Subdivide all
- Sculpt cloth and other materials, pinch legs where they are compressed by the belts
- Add wear & tear
- Add detail/ornaments to cape and some armor pieces
- Start the bow and arrows

And here's how I got there and what I learned: 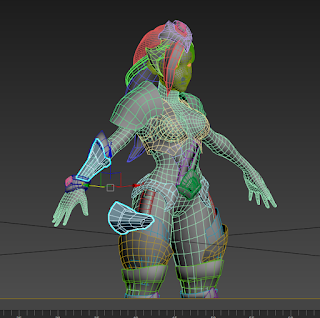 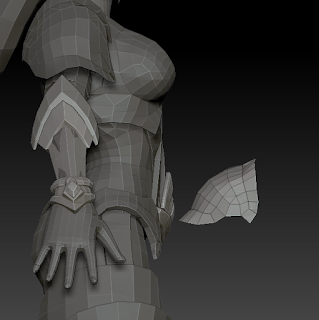 Armor modeling: Using both 3dsMax and ZBrush. For some actions, it is easier to stay in ZBrush e.g. on the right picture, I needed the shoulder guard to be symmetrical - I could do that in 3dsMax but Zbrush essentially has the same function if you put the subtool in the middle of the scene/symmetry axis and overall that proved to be a faster solution than waiting to get my assets to 3dsMax through GoZ. For some actions like edge extrusion and better control of topology, I chose 3dsMax because ZModeler couldn't offer that amount of control. 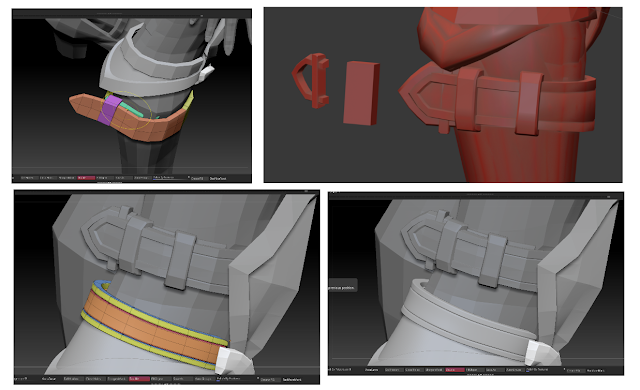 Keep it simple & clean: I'm already trying to think ahead and save myself from certain headaches with retopology. I model with the most simple, basic tools like CurveStrapSnap and use a lot of polygroups which allow me to affect only the areas that I want to affect. I do the more detailed stuff in 3dsMax. I put a lot of time and effort into keeping things clean, mainly because, for example with the belt, it is an asset which I will likely reuse in my future projects and having a clean base will allow me to create possible iterations faster. In ZBrush, I usually use DynamicSubdiv as soon as I can to catch any problems with topology. I played with some creasing and subdiv settings and I think I get the best look from the following setup:
- Crease level set to 2
- SmoothSubdiv level set to 5
I choose to use DynamicSubdiv instead of actually subdividing because my laptop is a true grandpa and gives me a BSoD whenever I forget to turn on my cooling pad while playing Witcher, or when asking it to handle more than 1 mil ActivePoints in ZBrush :D 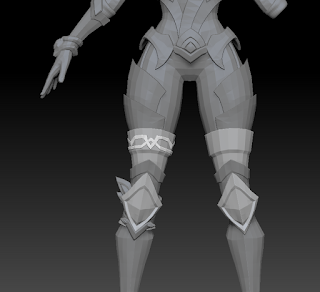 Iterate within reason - keep the feel of your concept and detail distribution in mind: This is one of the iterations I went through when trying to adjust the concept. I wanted to follow the look from the Wild Rift Model Viewer and tried to design some hextech-y ornaments to add more interest but ultimately, when I zoomed out, I my eyes kept sliding to her legs rather than her face, probably because I added a lot of belts to that area already and it felt too busy. I decided to re-design the whole area and added a boot with some simple lining which I think created enough interest through the geometrical shapes but did not make it too busy at the same time. I also reminded myself that Championship Ashe has more of a historical/regal warrior feel and I wasn't sure if the ornaments I designed conveyed that feeling.

Adding polypaint can help tune out shape design and get out of tunnel vision: After few days of work, I started noticing that I'm getting close to that moodling mode which I always try to avoid. Pushing polys, endlessly changing shapes which actually might have worked... Normally I would have probably taken a break but because I'm on a tight schedule, I decided to try a workaround and see if adding a bit of colour may help, and boy it did. An hour or two with polypaint gave me a fresh look on my composition and shapes. It was easier to see what will or won't work when textured and overall, it just feels nicer to continue sculpting on something resembling a good looking lady rather than a blank manequin :D
I also noted some solutions from my troubleshooting - I like to Polypaint with Layers because I can erase/tone down things easily, but when I first tried it on my Ashe, every new layer I made just insta-turned the model into a pure black color. First I thought it might be because of UVs but even unwrapping the subtool in ZBrush had no effect. I googled and dug around a little bit and I found out it was because my subtools weren't subdivided but had DynamicSubdiv on. As I said, my laptop is a granddad so I only used Layers when polypainting the face, few hundred thousand polys points can be handled.
Post a Comment
Read more

- March 01, 2020
Taking some time off from my Kled project has been pretty beneficial. I noted down some errors I haven't seen before and also got some amazing feedback from the kind people of Handpainter's Guild  Discord and especially Miki, whose feedback rekindled my enthusiasm for the project. Later on I received great additional feedback from Ryan Ribot which I tried to apply below.

The main project I'm working on is still my PBR ashe (blockout post under this one), currently refining her armor!

Kled
- Model in more of an expression into the face, move the eyebrows down to give him more of a mean look, also add shadow under eyebrow and near eyes to sell the form
- Add shadow beneath the nose
- Add more form into the beard, think of it as a one big form. Push the sides in by adding shadow.
- The golden tooth could be a bit more saturated/emphasised
- Slightly suggest folding on the pants to break up the even look
-  Increase the lightness on top of the ears, darken the bottom again, think of it as a big form
- Emphasise the blue patch, shadow beneath it
- Add purple colour to the hat, as seen in the concept, messy texture
- For the hat, make the top lining a bit more gold. Looks too similar to the fur colour.
- Add light to the top side of the glove (3dCoat Color Dodge)
EDIT: Additional feedback from Ryan Ribot- Head should be lit more like a ball, more light in eyebrow area as well
- ambient occlusion: push it and add a colour to the shadow
- e.g. pants: rich purple in the shadows would be nice
- gold buckle: too bright (against dark background), tone it down
- there should be a gradual transition in value from top to bottom, darken the boots
- don't forget to add ambient shadow at the intersection of two surfaces (e.g. boots/pants)
- add folding to pants
- coat: currently one flat colour, add volume, e.g. darkening the sides
- light arms and legs like cylinders

Skaarl
- Push the shadow on the bottom of the chest further
- See the concept for the planar change on top of the eye, add that in
- Add the scratch/scar to the top of the head. Great Whites are less polished.
- The top of the head is too flat. Add scratches, lighter details, fish-like texture with color variation.
- Darken the eye, add highlight and indicate the pupil
- Add highlight to the leg, top of the tail
- Take the desaturated browns from the saddle and add them to the blues in the face. Making them pop really nicely! Desaturated values next to your saturated ones will make them pop.
- Add slight colour variation to the nails, they all look kinda same
EDIT: Additional feedback from Ryan Ribot
- Can't see the hook and metal stirrups: change value and contrast
- Darken the legs
- Overall, use value to distinguish different parts of the model. Grouping values is a thing to always keep in mind.

After a lot of great additional feedback from Ryan, mainly focused on contrast and value, I wanted to do a third pass on Skaarl; I worked with a black&white overlay for a bit, trying to push and distinguish the different elements in values. I found I am learning a lot about values and readability throughout the whole project. I also tried to clean up some of the areas I saw as messy (sometimes it takes me a few days away from the project to re-set my brain and get out of the tunnel vision :D Wish there was a button for it!).

Sword
- Push the contrast in the metal, emphasise the planar change by adding shadows
- For presentation, think about the direction of the light. With non symmetrical parts of the sword like those on the handle, add shadows cast to the unlit part (figure out after posing)
- Add a little bit more interest and detail to the plain steel part (e.g. cuts, scratches) but not too noisy
- Use Navigator in Photoshop to check the zoomed out version and think about bigger forms
- Add more highlight to the top of the sword: Color Dodge layer from 3DCoat, bring to Photoshop, don't use white, more like mid grey
- Add a little bit of light on top of the handle, too flat at the moment, emphasise the cylindrical shape, again think of the lighting when posed

Overall
- For final presentation, consider not using the League of Legends Fanart logo at all in the thumbnail, it should be apparent what it is from just seeing it.
- Also use less saturated background so that parts of the model don't sink in.
Post a Comment
Read more
More posts