Showing posts from February, 2020
Show All

- February 19, 2020
Things have been all but calm this past week - crazy storms which make me afraid my electricity will be cut off any moment, amazingly surreal stuff happening career-wise which makes me too excited and scared to sleep and last but not least, my fun Championship Ashe PBR project which is turning out to be a real challenge.

I spent the first week cannibalizing my old meshes to try to put together a decent basemesh which would also fit the proportions seen in the Wild Rift showcase. I studied the differences between the versions in Wild Rift and current in-game models ->
1. much more detailed but still feels way cleaner
2. proportions are more stylized, more pushed
3.  not as much emphasis on models looking good from one angle, rather looking good overall
4. asymmetry added by adjusting the old design, don't be scared to add additional meshes
5. more personality shown (e.g. stance, or even through clothing, more room for storytelling, use it)

I gathered some references and worked out my main concept sheet. I overpainted a few bits, possibly still not final as I'm adjusting things as I sculpt/model: 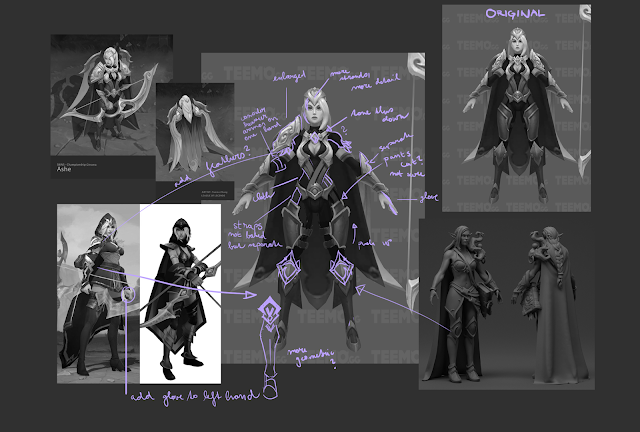 Main changes to the concept:
- more detail everywhere (e.g. hair strands, cape decoration, etc)
- asymmetry in the chest piece
- adjusting the leg guard design to fit the taller proportions
- adding details to things like leg/arm guards, gold trims? more geometrical shapes as seen in Wild Rift redesign?
- asymmetry in the shoulder pad: heavily guarding the arm holding the bow and detracting from the armor on the arm which is supposed to pull the bowstring -> more fitting for an archer? I'm not sure about this one as it's a drastic change to the original design and I'm scared it won't read as the original skin anymore. I'll try both versions and decide later.
- adding a finger glove to the hand which pulls the bow string, look up archer ref
- adding feathers to the shoulder guard as seen in Wild Rift redesign (?)
- face closer to the Wild Rift reference (larger eyes, head, more stylised look, slightly anime?)

I started working on the blockouts by extracting and Zremeshing stuff in ZBrush and cleaning it up in 3dsMax, once again, GoZ rules. Some process screenshots I remembered to take: 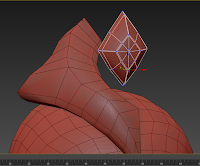 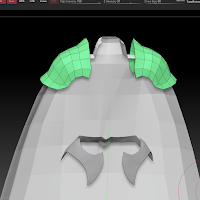 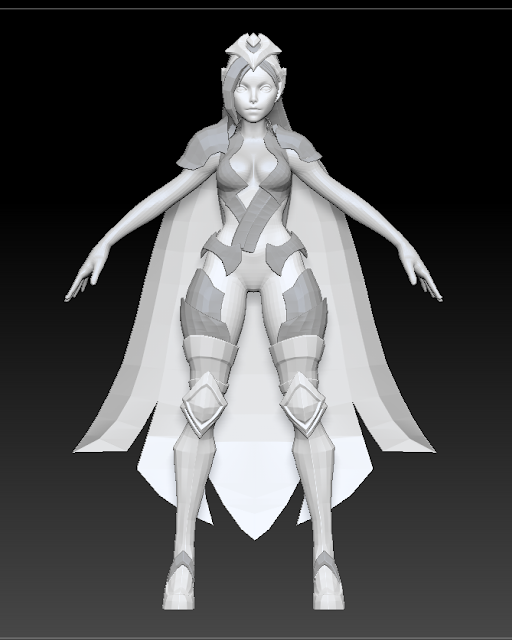 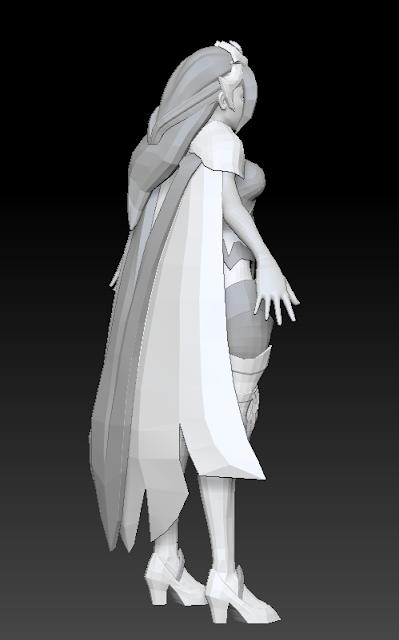 I'm trying to keep everything as low poly as possible - I found that my previous Kled and Kai'Sa projects (mostly started by polygon modeling) have made it easier to do things in 3dsMax than sculpt dynameshed stuff out in ZBrush and then retopo. And it's cleaner.

One of the main things I'm finding challenging at the moment is adjusting the concept. It's a constant exercise of proportions, figuring out what shape design looks most appealing or even imagining how the shapes will look in the final composition. I'm having fun doing it because it allows me to put a bit more creativity in the process but I'm realising this constant iteration costs valuable time and I have to be faster with my decision making. Wish someone made a Gumroad on how to balance it all :D 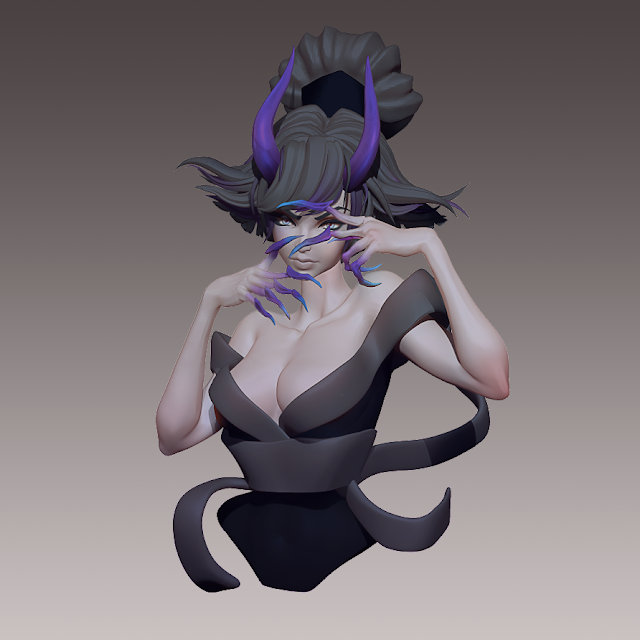 Blood Moon Evelynn sculpt from the previous post's WIP, based on a thumbnail by Esben Lash Rasmussen.

I was starting to spend way too much time on this one and I need to be on schedule for my next project so I just salvaged as much as I could from the horrid entity of what my old sculpt used to be (what are those hands, honestly :'D) and I used it to practice Polypaint, materials and rendering in ZBrush. I was very much inspired by the rendering style of Dmytro Bajda and his Evelynn sculpt. Still not something I'm too proud of, I really wish I had the time to re-sculpt the hands fully. But I'll try to do better in my actual PBR project which I am getting into now! Main things to focus on -> for God's sake, keep your forms as low poly as you can until you're sure of the shape :D Bold shapes are the way to go in stylized! Clean topology -> less headaches when retopoing later! Re-read this: https://80.lv/articles/sculpting-stylized-characters-tips-from-julia-pishtar/ again!

My first TFT NUEL match is also approaching - tomorrow! :D Ever since I got into Diamond I'm so scared of playing to not drop down, haha. I think I might do a few unranked practice games tonight.
Post a Comment
Read more

- February 10, 2020
The Kled model is in the final stages and I'll be putting it to rest for some time. I still have to rig it and present it in 3D but I'll do that after I gather enough feedback and finalise the textures. For now, I'm shifting my focus to my next project. 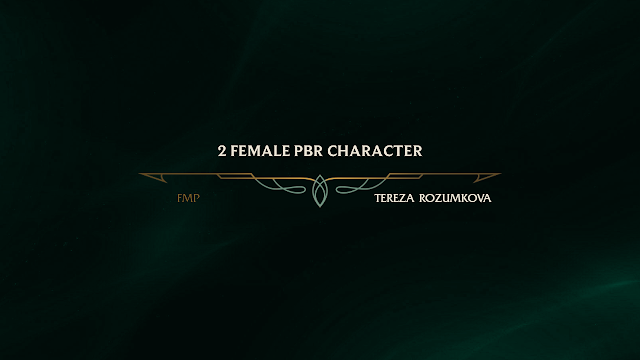 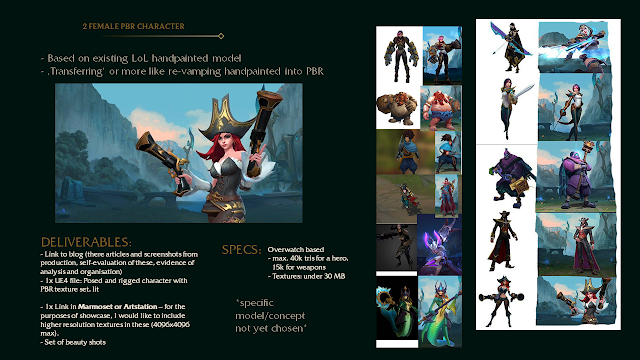 I was watching the League 10-year anniversary stream on Twitch when the idea for this project came to me (I would recommend everyone to watch it if you've missed it, especially concept artists -> there was a super fun segment where amazing artists Taylor Jansen, Jeremy Anninos and Jason Chan designed the funniest skins. I will still wish with my whole heart for K/DA Gragas to come true in game! :D).

When Riot introduced Wild Rift, I was, like I think everyone who watched, stunned by the PBR renditions of the handpainted in-game models we knew so well. They looked so different but still completely true to the champions and their skins, somehow even enhancing their personalities. It wasn't just a few thousand more polys added to the same models - it was a complete re-vamp. I thought this would be super-fun to do and a great challenge as it would help me learn what makes assets appealing and how to better convey personality and story through a model (as well as practice my PBR workflows).

Choosing the champion was another challenge that took me longer to figure out. There's too many good ones! I was tempted to aim for my dear main Miss Fortune but I feel like I've been focusing on pirates a lot (pirate Kled, previous PBR Sea of Thieves project..) and I wanted to get some more diversity into my portfolio. I spent a fun evening on Teemo Model Viewer and picked out some of the skins I would be most interested in:

I was trying to aim for skins which did not have a released PBR version or high poly version on Artstation just so I would not have a clutch and tried to figure out as much as I could myself. After much thought, I chose Championship Ashe which I always thought of as one of the most beautiful skins in game. Her design is already super nice, so it will be hard to find any improvements, but I like the possibilities offered by her bow, cape and floaters which could make an interesting final composition when posed (something similar to Steve Zhang's fanart below). One thing I also love about the skin specifically was that a portion of the proceeds from her sales went to charity! I love seeing that trend in games and wish there were more skins like this :D

Right now I'm also getting back into ZBrush after a month's break. I took an older sculpt of Blood Moon Evelynn I haven't finished and I'm trying to make it more polished while learning new shortcuts and tools on the way. Old sculpt: 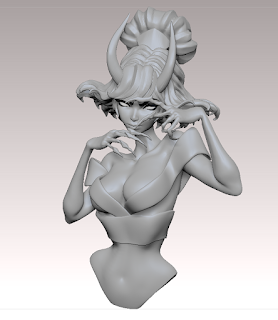 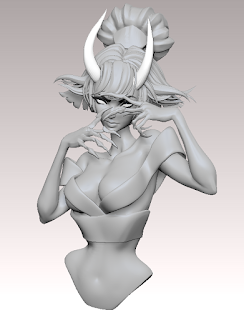 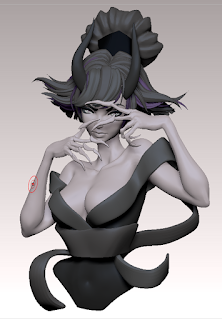 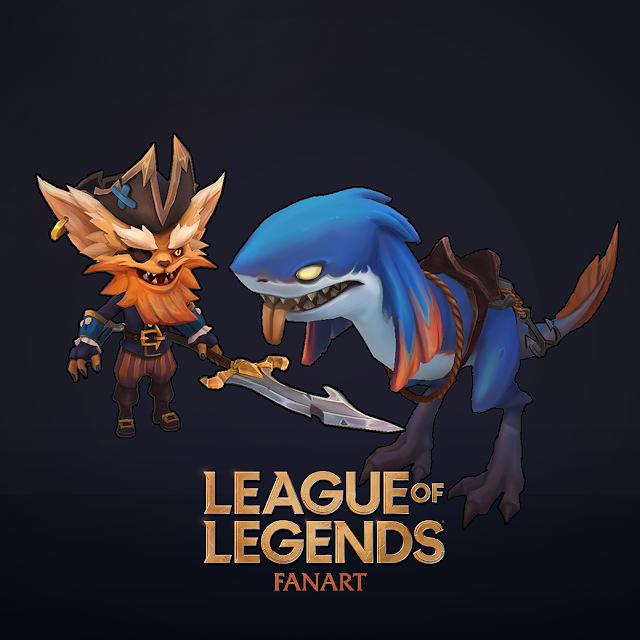 Current version of the textures. I'm still intending to ask more people for feedback but I'm not hating it anymore! :D 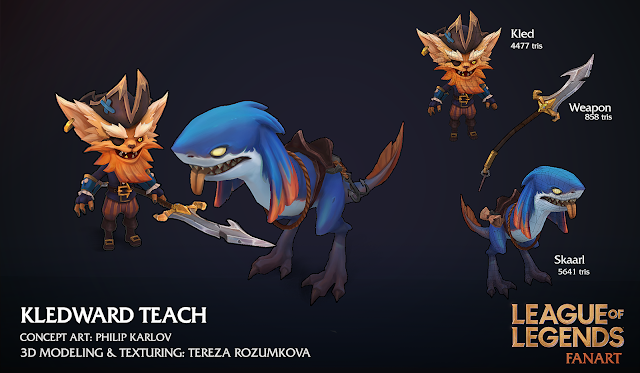 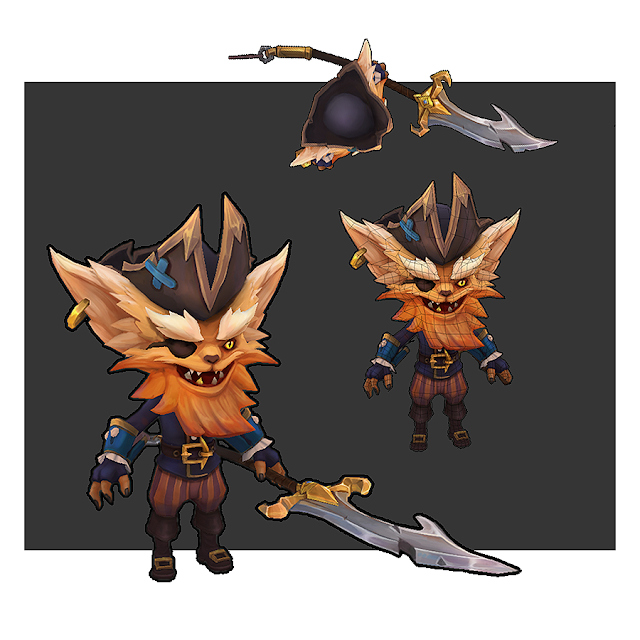 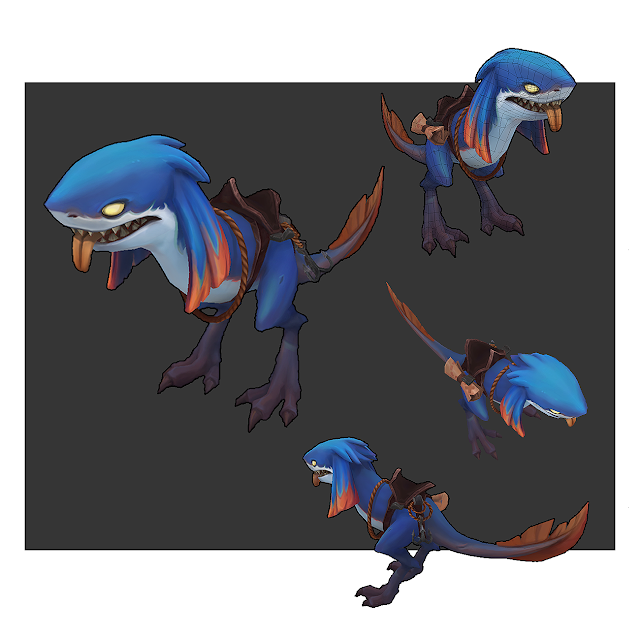 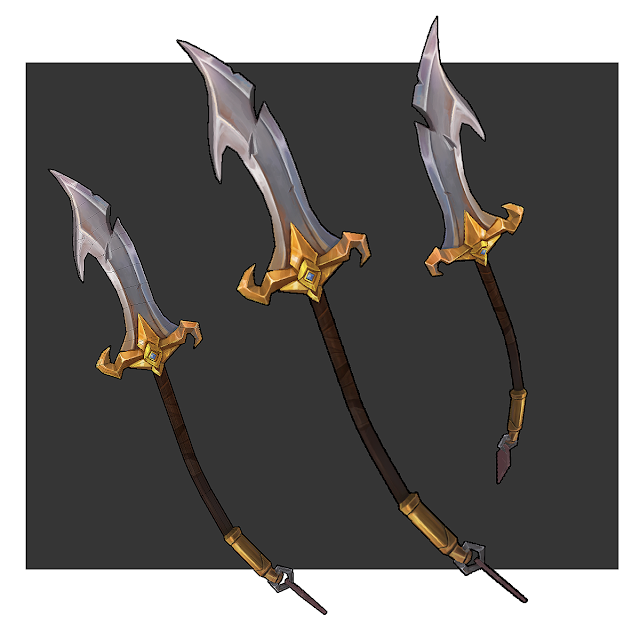 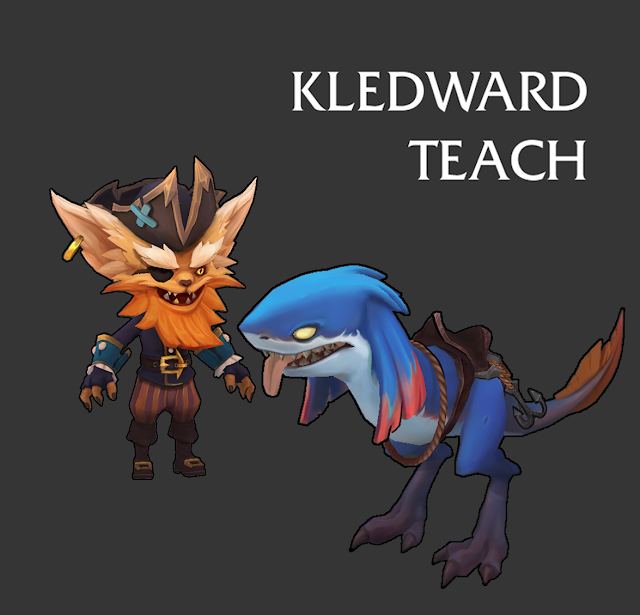 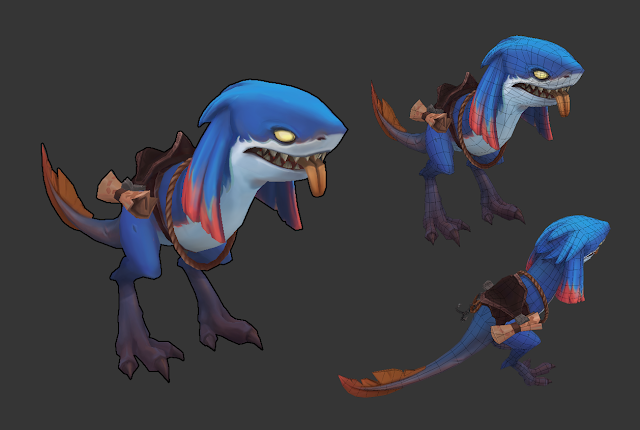 Update on the WIP:
- Majority is done, but I still have to do a pass of overlay/multiply and color dodge to polish.
- Also needed: bringing all the models together and tie-ing the colours
- I am not sure about Skaarl's eyes. The concept clearly shows her with pupils and anime-ish rendered eyes, and I tried those but I kinda like this pupil-less version more. It makes her feel more like an underwater creature. But. I know from the lore (which made me tear up btw, such a cute tale of an unusual friendship :D) that Skaarl is not meant to be super scary, more like super scared :D She's just an immortal goofball. I'm really on the fence with this one. I'll have to ask some people for feedback!
- I'm also not sure if her ears should be this small. They look okay proportionally but they look bigger in the concept. Fortunately enlarging them would not be that big of a deal as they're modeled as floating geo. Another bit I need to get feedback on :)

For now I'll try to give my eyes some rest from this turqoise beauty and focus on the weapon which I also want to use as an opportunity to study metals in depth.

I went back to  Katia's amazing tutorial series to gain some inspiration and notes:

- Don't be afraid to try out striations on your metals and materials. Do it with overlay on another layer and if it's not working, just delete it. Better to try out and iterate if it can add interest to your work.

I love how polished and interesting Katia's textures look. The mastery over materials is something I get inspired by every time I see her art. I tried to analyze some of her painting and kept some notes I can come back to when rendering: 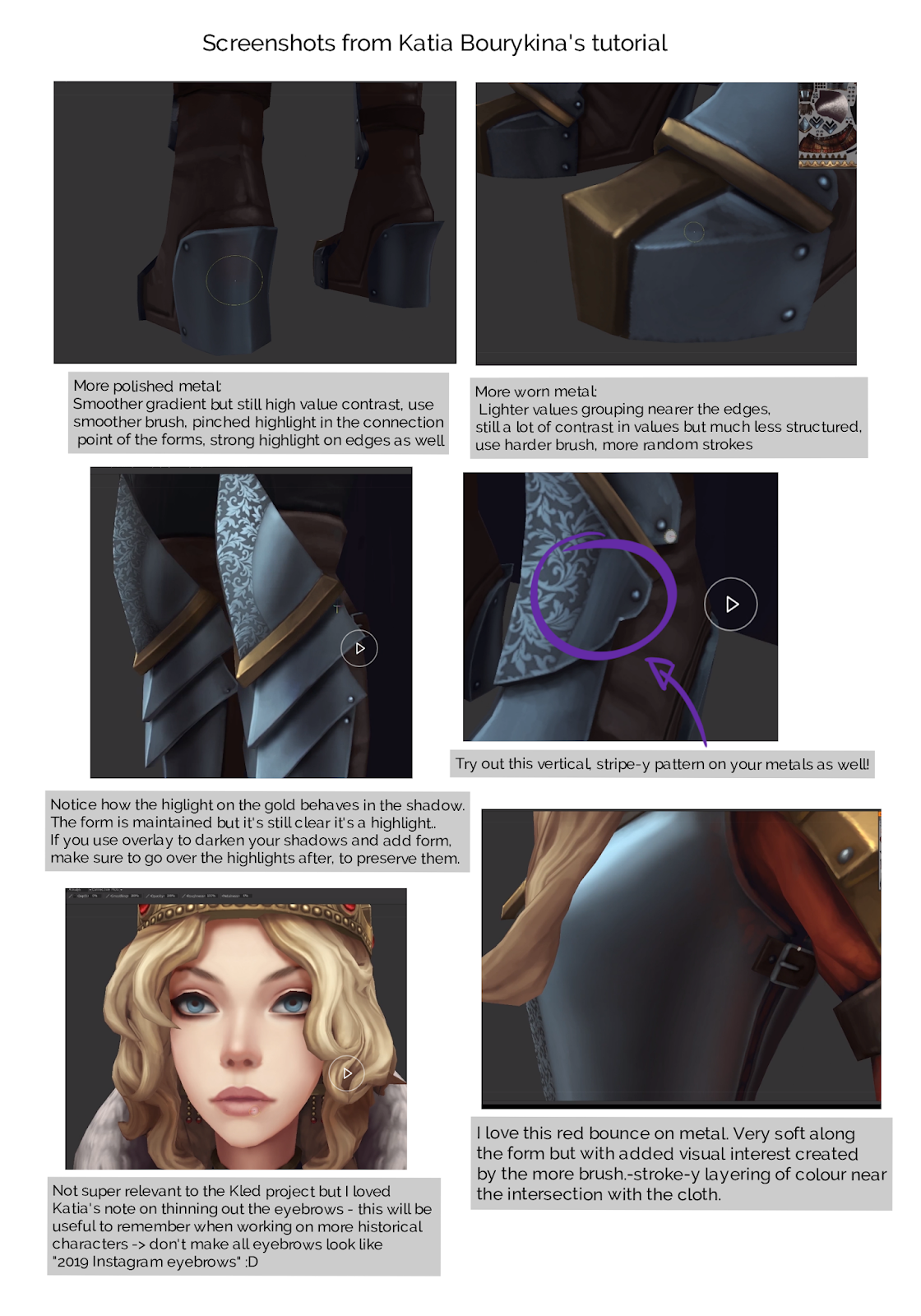 I'm really enjoying this and learning so much! My next project is going to be a PBR one, it will be sad to say goodbye to the handpainting for a bit, but I'm super looking forward to working in ZBrush again :D I'll also try out some polypaint methods I saw in Leslie Van Den Broeck's work, so that shouldn't be too far from handpainting anyway. I just wish I had at least 48 hours in a day or no need for sleep.

I'm also happy to say I'll be representing my university in the NUEL TFT championship. No idea how I'll make time for it with two part time jobs and such intense projects but it's my last uni year (hopefully, haha) so I've got to fit as much exciting stuff in as I can! :D
Post a Comment
Read more
More posts